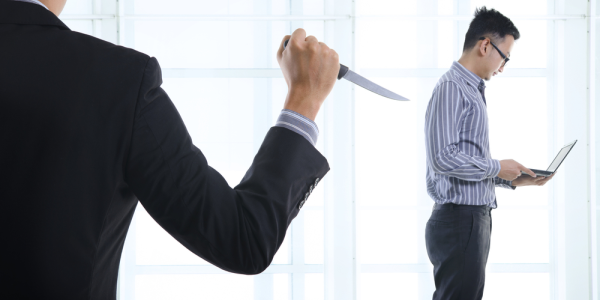 Your Way Around Office Politics

It’s a Saturday night, you’re out partying with some office friends and you’re having a pretty good time. Suddenly everyone starts giving you the cold shoulder. Your apparent close office buddy keeps you extra company to cover up for the others. When you ask what’s going on, you don’t get a straight forward reply, which in turn makes it awkward for you- awkward level: EXTREME. What the heck just happened? From cloud 9 to Alcatraz all in one evening!

Chances are, they’re about to give you your surprise birthday party or you just got victimized; the perpetrator-office politics. It’s the dirty, but very real, truth of the corporate world. And, we Indians seem to excel in it- be it a start-up or an MNC there’s always politics and groupism going on in our workplace environment. Let’s face it, sometime or the other you are going to be a target. So how does one minimise, if not eliminate, the effects of workplace politics?

Know that everything isn’t under your control. There are bound to be certain situations where you’re cornered and may have no way out. In such a case, it’s always handy to know whom you can and cannot trust. Some would argue that you really can’t trust anyone- I beg to differ. Not to sound like Samwise Gamgee from LOTR but “there’s still some good left in this world”. Needless to say when you’re in a tight spot it really pays to have your trusted wazirs around you. Comfort, support, a fight to the finish- no matter what these guys have to offer it’ll come in handy.

The bitching you do about others may very well be kept a secret until such a time where people have to take sides and if it’s you who’s playing rope in the tug-of-war, no matter what happens you’re going to end up being ripped apart. Of course you could always join the rope again by tying it but there’s going to be that knot in the middle to remind you and others of what should have happened, what shouldn’t have happened and what really happened. You’re automatically making yourself vulnerable when you add spice to or start a gossip. Most people don’t really differentiate between gossiping and bitching, but that’s only when they’re the victims of course! In either case less bitching equates to less vulnerability, after all you never know- one of your trusted wazirs may actually be a spy!

3. Be straight forward, not a jerk

There’s a very thin line between being straight forward and being a jerk. While being straight forward is considered by many as a head on approach- usually classified as a positive quality, it doesn’t mean you walk up to your team mate in front of everyone and bombard him about his bad breath. Doing so will definitely earn you the title of Mr. bold but it will also earn you a lifelong grudge. Most workplace politics are played or aided by those waiting in the shadows, to strike back at an arch nemesis and who else to consider as an arch nemesis other than the one who humiliated you publicly. See, there’s always a way to speak your mind out without offending the other person. At the least, you can talk to the person privately and let them know what you think about their breath or whatever. This in turn will earn you their loyalty and respect, and get you the tag of being honest with a pinch of care.

4. Maintain an arm’s distance from the management

Like it or not, the management isn’t always telling you the truth. Don’t be overly friendly with your superiors. They have their dirty tricks up their sleeve. A conversation which you may consider as candid and informative may have actually been initiated by your boss with a very different motive. When bosses need to extract certain information that only their employees have and are reluctant to share, they tend to target the weak links- people who would disclose information without much persuasion or who are suckers for freebies (promotions, bonuses, recommendation to CEO, etc.). Don’t even think about betraying your own kind to get into the good books of your boss. Your boss might very well be playing you without your realization. At the end it becomes very simple for your boss to wash his/her hands off in the face of a conflict thus giving politics an open invitation to remain on your calendar for the next few days. When in doubt, remember he/she became boss for a reason.

No hitting on anyone inside office, no cheap flirts, no hints, no nothing. You’re here to work, to build a career. Why expose yourself to a situation wherein you’re looked at as a sexual predator? Your love story could very well be used by possible haters to bring you down. Most people today are self-sufficient and don’t need a psychologists’ degree to know how to manipulate your mind, and in this case, your heart. Messing with people’s emotions is at the core of office politics and when it comes to love, there’s no easier target that you could give them. Even after what you just read, if cupid still strikes you with his arrow of love then please get a room! Preferably not one in the office (Pun intended). Keep your romances outside of your workplace and further disappoint potential schemers.

Ah! That one point in your office where everyone gathers around together- no I’m not talking about lunch hour, I’m talking about colleague wars. Be it a boss or an employee or maybe even your peon, everyone loves to see a good fight. But you know what’s better than watching a fight?-watching a group fight! When everyone’s at loggerheads don’t shy away and pretend to be miss goody two shoes. Take a stand, after all it’s your office too. Ensure that your voice is heard, keep it assertive. Let people know that whatever it is you believe in, you’re willing to fight for it but in a civilized and if I may say, a diplomatic manner. That being said don’t venture in too deep lest YOU become the matter of debate.

So there’s a rumour doing the rounds. It’s got your name directly or indirectly involved. What do you do? Ignore- because you don’t give a damn to what people say or think about you right? Wrong! Not responding to such situations and simple ignoring them won’t help you and may, in most cases, lead to undesirable consequences. But that doesn’t mean you go all out guns blazing. Remember point no 3? That could come in handy here. While it’s good to show people that you’re not being affected by what others say, you need to have your defence strategies in place to prevent further damage and contain what’s already been done. Maybe you could start a counter rumour for example. Either ways, react but don’t show your reaction.

Victim or not, office politics will always be a part of our corporate lives. It’s only a matter of time before it gets to you. In fact, I’d like to believe that it’s only natural for us humans to conspire against each other and try and bring others down only to realise later that while we were busy digging a pit for someone else, someone else already dug a pit for us.

Hello, I’m Floyd Fernandes, currently pursuing an MBA with an HR specialization. Besides having a passion for reading and writing, I like involving myself in management activities, researching on the paranormal and pondering upon the existence of aliens. I’m an individual with a mindset that demands continuous self-improvement and am keen on making my mark in the world of Human Resource Management.