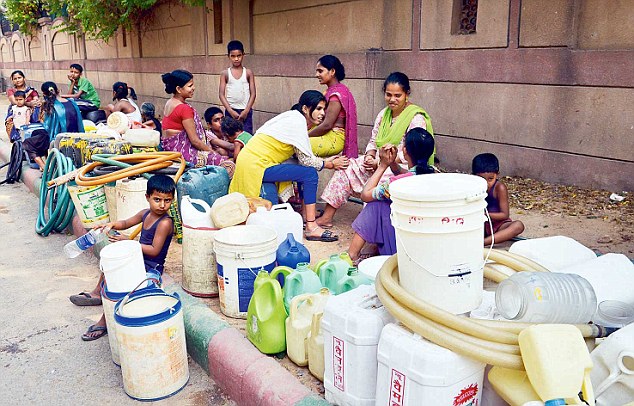 Extreme heat across south India, unprecedented power and water shortage. Bengaluru is no longer the naturally air conditioned city of India. It is no longer cool during the summer. The situation has gone from bad to worse in the last few years. This summer has already become unbearable for the people of Bengaluru. The entire city is baking under the sun. The maximum day temperature has already touched 37 degree Celsius and the minimum is around 22-23 degree Celsius.It feels like May in March.

Bengaluru is not used to something like this. The situation is much worse in the rest of Karnataka. Temperature has touched even 40 degree Celsius at many places. Chitradurga in central Karnataka is experiencing a very hot summer. The mercury has crossed 40 degree Celsius. In other major places like Shimoga, Mysore, Davanagere, Hassan, Kolar, Mandya, Hubli-Dharwad, Belgaum, Raichur, Gulbarga and Bidar the maximum day temperature is well above 35 degree Celsius. In the hottest place Bellary, the temperature has crossed 39 degree Celsius.It feels like May in March. Temperatures have already touched 40 degree Celsius at many places in Karnataka and other places in the south.The severe heat has led to water and power shortage across Karnataka. More than half the districts in the state are facing drought and even the hill districts are facing water scarcity.

Most parts of the state are getting no power during day time. Even state Capital Bengaluru is experiencing long hours of power cuts. The shortage is so acute that power went off twice during chief minister Siddaramaiah’s Budget presentation in the state Assembly last Friday. He continued the budget presentation in darkness with the help of a mobile torch held by an assistant.The failed monsoon of last year due to El-Nino is the main reason for rising temperatures and water – power shortage across the state. Most reservoirs are almost dry and major hydro electrical projects like Sharavathi are facing a huge shortage of water needed to generate power. The KRS dam, which is the main source of water to Bengaluru city and other major cities and towns in many parts of old Mysore, is also dry. It has created a panic among the residents of Bengaluru.

Speaking to IBNLIVE from Bengaluru Chief Minister Siddaramaiah said “situation is quiet bad. The monsoon failed last year. We are facing an unprecedented situation. If we get some rain in April and May, situation may improve and at least we get drinking water. We are doing our best to handle the crisis. We request the people to understand this and cooperate with us”Neighbouring states of Kerala, Tamil Nadu, Andhra Pradesh and Telangana are also facing the same crisis as the monsoon has failed all over South India. The water surplus state of Kerala is also experiencing an unprecedented water crisis at places like Palakkad and Kannur. The temperature is above 35 degree Celsius across the state and likely to cross 40 degree Celsius in April and May. Kerala is voting in the Assembly election on May 16.Situation is much worse in another poll-bound state Tamil Nadu which also voting on May 16. It is already feeling like May in state capital Chennai.

Many districts in the state have been declared drought-hit and farmers are leaving their parched farms and migrating to bigger cities looking for jobs.If pre-monsoon showers are good, it can at least quench the thirst of people. April and May are the two hottest months in the South. The South Western Monsoon enters Western parts of the state in the first week of June and covers the entire Deccan peninsula by the end of June.“If the monsoon fails this year too, even God can’t help the people of South India” said a housewife from Karnataka.  So “Save Water , Save Life and Save Earth”.

Share and bring awareness in utilizing water as it is the need of the Hour. Just like Earth hour on other day we need to observe an active hour from each family everyday to conserve water.Tags: Water Resources Water Natural Resource Management About the Author: Author is an entrepreneur and founder of online healthcare services providing platform Medikab.in with 17+ years of diversified experience in Pharma, Food & Banking sectors worked in India and Overseas.