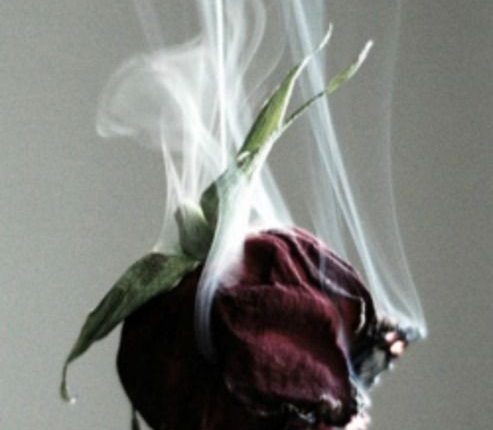 The scent of a Withering Bloom

Death wandered past her window,
Life managed to get a glimpse
Of his dark overalls, from in between the cracks of the  dust stained windows.
The flowers outside wilted instantly,
As he walked by,
Unaware of the spreading decay,
That trailed behind him.
Painting a picture of stillness and grey,
While the summer begged to stay.
She rushed out,
Touched the dried petals in between her fingers,
Her cheeks flushing red,
She wondered what He could have whispered to them.
She smiled and said to herself still smells the same.
And then one fine day,
Death finally showed up at her door step.
She laid their on the cold deserted road,
Freshly bathed by an early summer rain.
Her smooth skin wasn’t shriveled up,
And her blue irises weren’t clouded yet.
No traces of grey,
Poked out from the tussled mass of brown.
He came and gently held out his hand,
And picked her up with the most gentle pull.
They danced arms in arms, twirling
And she could feel the night swallowing, Up the laughter that escaped from within her.
As he lifted her, holding her to the sky,
She could see the moon and the clouds That waved goodbye as the night,
Prepared to usher in the sun.
The rhythms of the beeping monitors, became nothing but white noise to her ears.
The frantic voices telling her to hold on
faded into the background.
And nothing could be heard except the sound,
Of her fading heartbeat.
Do I hold on or let go?
For I have never felt happiness throbbing through every vein that pumps within me,
Is it time for me to be sowed?
Do I hold onto what I know I feel?
Or do I accept defeat and enter this body that becomes a cage,
For a soul that only desires to be free?
Questions, questions
Arrived and departed her mind,
And she stared up at the changing hues of the sky.
She looked at him,
Sleeping soundly, clutching her pale hand.
His face looked so familiar,
Nothing like the strangers she was surrounded with everyday.
Do I leave or do I stay?
The sun was almost peeking up from the bay.
She took one last long hard breath,
And engraved in her memory every known scent she had ever scented as she leaned in and kissed him.
Everything snapped shut.
Life, looked at the helplessness in his eyes,
As she let go of his hands,
And fell down.
Into comfort and silence,
And she smiled back as she was lowered into the cool earth that waits patiently for us all.
The air hung heavy with the smell of sorrow and loss,
And when everyone was gone and silence had never felt so loud,
He accepted the cruelty of his being
For everything that breathes must die.
Lightly he placed the flowers on the stone that marked her existence.
And turned away,
Catching a last glimpse of her, he smelled his hands
And whispered, “still the same”.