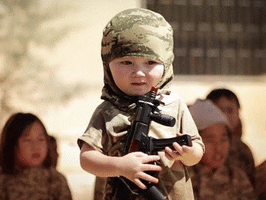 The Metaphors of map- black and white

Recent updates on newsstand depict an explicit image of the areas annexed by the ISIS. The map shows Iraq in black against the contrasting white world around. But I often wonder if this map correct. Are black and white the appropriate metaphor for the massacre in and around Iraq? If yes, why didn’t the cartographer paint the whole map in black because violence is not merely only the story of Iraq but the whole world.

This planet is the only home we people have (at least till now). People- of different religion, region, language, gender or physical feature. But unfortunately every other hour, there emerges a new story of a conflict or confrontation where these social differences become social division. But why can’t people simply accept each other and celebrate each other’s specialties?

But peace had been established in the world many years ago then why is that the world is constantly brewing anger, and blowing  off their steam onto others. Building peace is easier than maintaining it. Intrusive elements like anger, lack of confidence and ego can destroy the peace inculcated. Non violence and self control are the ultimate and only medicines. they help us to keep ourselves calm and maintain the fabric of peace. Peace is like knowledge, it expands when shared. This is what lacks all across the world. People are peaceful at a young age. But this peace is not shared about in the society as a result, the flame in the flambeau of peace starts to dim and ultimately goes off leaving the wick alone.

This is not what is happening in Iraq. Under the dark, smoky blanket; amidst the sound of the mortars and rocket launchers; in the thick of the wettest cheeks and driest throats, when people across the world are fighting amongst themselves, here in Iraq  humans are fighting against violence. When around the world, trees are consigned to flame, in this pitch black area of the map, the flame of peace is becoming even stronger and rejuvenating the dead flambeaux to do away from the violence. Yes it is true. People might see the violent and terrified face of Iraq but I would perhaps like to see the situation in inverted colours where humans are fighting against the demons and where unity is slicing apart the divisors of religion. The question is yet the unchanged- is black the appropriate metaphor?

When will peace be established in the world? Can it be done? When tolerance overcomes terrorism, when relief overcomes revenge, when people think not of being great but grateful, when a halt is put on trust on destiny and we trust each other, when the social differences do not become divisions, when the world is not broken up into fragments but weaved into a fabric of unity, when we abhor loving to live and accept living to love, then shall peace prevail on this planet. Today, when the world is threatened by various catastrophic elements, it is time to follow the words of the greatest admirer of peace, Gautama Buddha- Just as treasures are uncovered from the earth, so virtue appears from good deeds, and wisdom appears from a pure and peaceful mind. To walk safely through the maze of human life, one needs the light of wisdom and the guidance of virtue.

May peace prevail on Earth.

Hi i'm a first year student at MSIT, Janakpuri pursuing B Tech in ECE. writing is one of many hobbies. Here is one of my works,