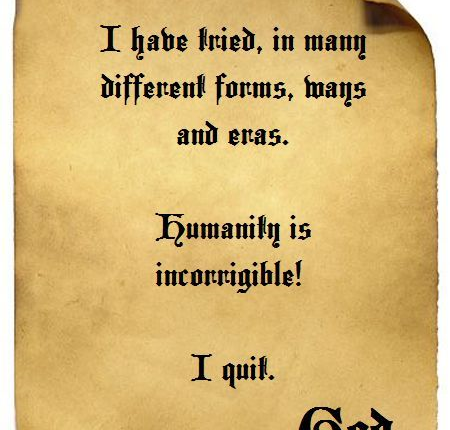 Subject: Resignation Letter from the post of the almighty.

You are my most treasured creation for one reason alone; I created you to be an image of me. But then, I went a step ahead and gave you the most powerful weapon the universe has ever seen- free will. At first I was pleased with how well you were using the free will I gave you. You did many great things, achieved amazing feats, governed yourselves, loved and helped one another grow.

And while I was watching, silently, in the shadows of your darkest times, my senses embraced the feelings of your prayers. Out of the millions of people who have faith in me and who cared enough to pray, I often heard them say, “God, why do you remain silent? Why don’t you do something about this?” Some of you even go on to blame me for everything as though everything moves according to my will.

Stop to think for a moment. If all human affairs were to happen as per my will, why in all the heavens would I give you free will?

Sometimes, when I look back in time (and I do that a lot), in many events throughout time I wish I would’ve intervened. But each time this thought crosses my mind I realize that I already have. For when one human was hurt, another came to his aide. When one human was robbed of his food, another came to feed him. When one human’s spirit was broken, another took it upon himself to rebuild him. Believe it or not, this is a doing of your free will and not my divine power which you so much crave to experience.

You keep having faith in me and expect me to reward you for the same. But do tell me, would you reward, defend or bless someone only because they had faith in you? I think not. You would surely demand a host of actions to prove one’s faith before you did reward, defend or bless them. My dear humans, faith alone is not enough. You need to perform actions to put your faith to the test and make of your faith something useful.

Yes, I’m the almighty. Yes, I am the alpha and the omega. And yes, I kept watching as people who had faith in me went on wailing in misery pleading for my help. But this I tell you today, the only reason why I kept watching while my faithful (and those who are not) endured the misery of human affairs is because, while you were busy placing your faith in me, I was busy restoring my faith in you. Shocking, isn’t it?

I do not ask that you mend your ways or change your paths. I’m afraid that the time for that has already passed. What I ask instead is that you bring peace to someone’s heart. Help put a smile on someone’s face. Be a father, a brother, a son to who needs one. And by doing this you will realise that the change has come to you.

The power is already within you. Good, evil, right, wrong, you choose. But a word of caution, making a choice is free but its consequences may cost you. But don’t worry about the costs, I got you covered. Think of me as your insurance agent, whatever costs you may incur while doing good, I assure, will be repaid in full when my angels come to receive you at heavens gate.

Hence, I resign from the post of almighty. Not because I’m fed up (as you may have assumed), but because through whatever I have watched through the ages, I have realised that you really don’t need me. The free will I have given you is yours to use. Do as you please with it. In the end, you alone must bear the burden of your choices.

As I end my reign as the sovereign king eternal, I only ask of you to not make me regret my decision of giving you free will (in which case, I might just consider bringing the dinosaurs back, and then you deal with it.)

All the best with the future, for I may have seen it, but I haven’t yet confirmed it. The future is never set, but your will can be. So long, and farewell my dear humans, this God is going on one long vacation. And for those of you who still believe you need me to change things on earth, well, you know what they say…

… if you want a change, be the change.

Yours faithfully,
God- the almighty,
Heaven.

Hello, I’m Floyd Fernandes, currently pursuing an MBA with an HR specialization. Besides having a passion for reading and writing, I like involving myself in management activities, researching on the paranormal and pondering upon the existence of aliens. I’m an individual with a mindset that demands continuous self-improvement and am keen on making my mark in the world of Human Resource Management.