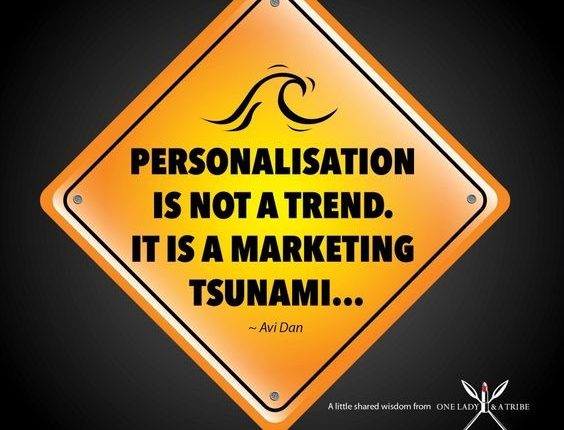 ERA OF CHANGE FROM MASS CUSTOMISATION TO PERSONALISATION:

ERA OF CHANGE FROM MASS CUSTOMISATION TO PERSONALISATION:

“Don’t find customers for your products; find products for your customers.” 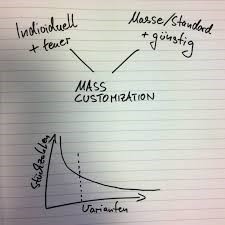 Mass customization was not really a new concept even when the world started talking about it.

If we go back in the 13th century, we will see how the concept of war was evolving. It could be called ‘a medieval arms race’.

Along with the improvement of the weapons, it was pretty obvious that the armor designed for protecting the knights, was also to be improved. Whereas there was armor way before the 13th century, the ability of penetrating of the longbow was able to change all the rules. The expert marksmen could actually shoot up to 20 arrows per minute as well as 1000 archers in a line were able to dispose of a whole regiment quickly & efficiently, specifically when such arrows were shot within a short range – piercing plate armor – resulting in making men & horses extremely vulnerable.

While, it was important to protect the warrior, the armor was awkward & heavy. Breathing was constricted, vision was impaired and even hearing was muffled. O top of that, the movement was greatly impeded. So in short it can be said that, a knight was not only supposed to fight with his enemy, he had to fight his own armor as well.

As a result, in the mid 1400s, while the historic was with France, England hired 2000 craftsmen from Italy to be equipped in the latest armor technology. They successfully came up with custom-made suits of armor. Definitely, it did not come cheap. But no-doubt such kind of custom-made armor gave the armies an enormous advantage.

Well, the world of marketing is also a battlefield. Market share, territory & ground are fought nearly every moment in every imaginable category. And when the advancements in mass production was helping in accelerating the climb of most of the major brands, there was a new & almost inverse trend up-and-coming namely “Mass customization”.

The world has observed as entering the era of custom-design for the masses, starting from the music on our mobile phones, to designing the cars we want through websites. The term “mass customization” is a very interesting dichotomy of sorts, “Mass” being the representative of majority & “customization” standing for individuality. This seeds of mass customization were actually there already when mass production started capturing the market. For example, one of the reasons of McDonald’s vast success was their steadfast consistency. No matter which area (in a particular country) the McD belongs to, it is pretty much assured that the menu will never deviate. Such kind of rigid consistency even resulted in one of the McDonald’s most memorable jingles:

But such cornerstone of McDonald’s success provided Burger King a strategic opportunity. Starting in the year 1974, Burger King was able to offer the public customized hamburgers by saying, “Having it your way.”

“Hold the pickles, hold the lettuce, special orders don’t upset us” was the perfect strategy for piercing McDonald’s armor.

McDonald’s realized that customization would be resulting in increased labor cost as well as would take the “fast” out of fast food. Whereas, Burger King seemed to be pretty confident while figuring out a proper way for allowing individualized burger toppings without sacrificing the speed or the price.

This proves that mass customization was a very powerful marketing strategy, as it positioned McDonald’s in terms of an inflexible organization, and placed Burger King as a people’s company.

Personalization is about leveraging what you can from individuals when they come to your inbound customer touch-points. Don’t think about different groups you want to market to. Think about the power of one and how to reach that person in the most customized and creative way.

Whether it is a valentine’s day, or mothers’ day, today everybody opts of personalized gifts. Starting from a photo-frame to your first car everything could be individualized with the concept of personalization. While discussing this very topic, I have to mention the movie named “Minority Report” played by Tom Cruise. It is the year 2054, a man walks into a mall and a camera scans his retina and identifies him. As he moves along, the advertisement changes on the board, targeting him specifically, calling out his name and offering special deals for him. He steps into a Gap store and a hologram wishes him with his name and displays him the clothes that match his taste. This is called personalization.

If I log into my Facebook account, I can notice an ad for a clothing site and that ten of my friends has liked that site. If I go to the website of Flipkart, it shows me the products it knew I was interested in. wherever I go on the web, I find more things that are of my interest and that is not the result of me being better at searching than I was before, it is because of the evolution of personalization. Being a marketer, it is very important to know that the more personal & targeted you can get with the messaging, the better able you will be for converting prospects into customers.

So basically customization is not at all personalization. If you term customization as explicit, personalization will be implicit. In the market everybody looks for trading in privacy for getting a personalized experience. It is very important to remember that the key to great marketing is having an in-depth understanding of the users. No matter how much technology evolves, this will never change. Personalization is possibly the next wave of the communal public user experience. It is about engaging customers with the utilization of technology in such a way that would mimic how people would do it if they were face to face. Mass personal relevance will allow the marketer to target individual offers tailored by data & driven by the customer input. It is important to personalize to the why of the intent for increasing the value of the customer experience. Personalized marketing is not just for the customers & prospects; it can actually affect change within an organization. You should get personal with your customers, but remember not to get creepy through using all the information you have while communicating with them.

The challenge is to create an psychological & emotional contract with the customers that would separate you from everybody else. Business is always personal. It takes time to build trust but less to establish likeability, which is the first step towards long term partnerships. The key to personalization is not automation or algorithms; it is to work your butt off. To personalize, you need to put in the effort.

Personalization is not just an opportunity but is a part of a set of broad, very profound societal changes where there is a trade-off between privacy and personalization. The three keys to balancing personalization and privacy are company transparency, consumer choice, and being accountable to those choices. With personalized ads, the goal is to reach the highest point of relevance for the lowest sense of intrusion.

So, there are three vectors of personalization: real time, what is hot, and local. People want to share what they do and information about themselves if you give them the chance to do it.

But of course this is not the end of the story. Like personalization grabbed the market opportunity from mass customization, something new will definitely come in near future to overreach the concept of personalization. There is a growing need for social media managers to rationalize what they are doing. The future of personalization will reward publishers that provide better content. 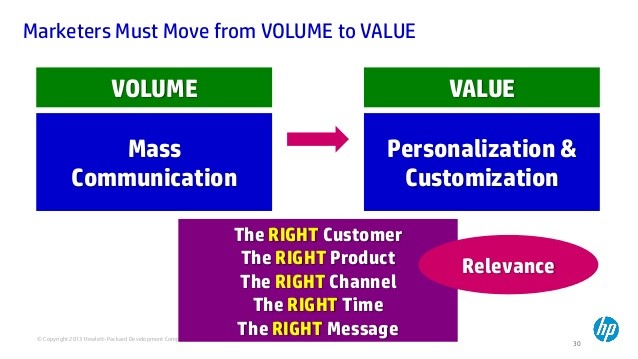