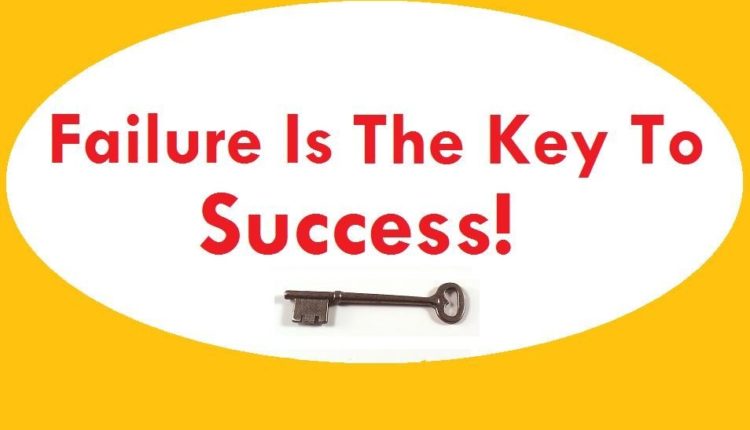 Do Not Be Embarrassed By Your Failures, Learn From Them And Start Again

“You must make a decision that you are going to move on. It won’t happen automatically. You will have to rise up and say , I don’t care how hard it is, I don’t care how disappointed i am I am not going to let this get the best of me, I’m moving on with my life” (Joel Os teem).

Every successful man fails at some time. Failure tells you about your weakness , shortcomings, lack of preparations, lack of efforts so if you can manage to learn from failures, you will definitely reach where you want to go. Making a mistake is not a crime, the ability to learn from it contribute to lasting success.

Extract the lesson to be learn from failure and try again with redoubled vigor.Facing failure make one strong, more wise, more resolute, spur to greatest efforts. There is no failure in truth save fro within; unless we are beaten there, wear we are bound succeed.

Failure’s lack of preparation , lack of competitiveness, lack of analyzing the things properly not only tell us that we couldn’t prepare ourselves up to the level of success and reveal our shortcomings,but also gives us encouragement to try again with more preparations, with more labor and with more hard work, failures are stepping stones to success.

Why to embrace failure ?

According to the recent survey conducted by ‘World Silver Publication’ public speaking is the most common fear in the youth generation. Like public speaking, failure is not inherently bad. Always we’re conditioned to avoid it, but there are plenty of reasons to change our perspective. Here are some of the advantages of failing i know :-

1) Failure reveals our ability. You will never know how much weight you can lift until you can reach an amount you can’t. By avoiding limits, you will never reach your peak. The fear of failure stops us a shorter than failure itself. So, keep going until more in impossible. Then cherish what you have achieved.

2) Failure makes us strong those weight lifters who lift to failure also have learned that is the way they build muscle. At first, Their tissue is damaged, but it will heal bigger and stronger than before.Soon, the athlete will be able to lift more weight. The same is true for our pursuits. Failure strengthens our character. We human bounce higher than we fall. Knowing that with each effort , we grow a little stronger.
3)Failure inspires us. When we don’t let discouragement hold us back, failure makes our desire burn hotter.Every successful man had failed, not once but several times in their life, but they analyzed the things in real perspective and tried again with more vigor and zeal and got success. Fusion should not allowed to create frustration, desperateness or disappointment, instead failure should be taken as a boon which give you strength to fight back with fierce fortitude and invincible zeal.

4)One who try , is always better than the one who dare not to try, only a person who dares to try can have a chance of success. Blessed are those, who once failed , is a saying work to follow. It means that thefailures make us capable to evaluate our shortcomings and purge us to reach the higher ideals, higher planks.

5)The very great Abraham Lincoln failed many times in his life, but never got frustrated and fought with more determination, with full devotion and became the president of America. Indian freedom fighters including Mahatma Gandhi , Jawaharlal Nehru etc. saw face of failures not once but several times, but never counted or became desperate. They all had fought to attain the sacred goal of attaining freedom, and as a result , with the time they finally attained it.

6)There is nothing that comes too easily worth satisfying. When you want to succeed , be ready to pay the price of it, which include braving failures and setbacks and keep persistent with your efforts till the goal is achieved. The reasons of failure may seem staggering.

7)You can either be defeated or discouraged by failure or you can learn from it and analyze the cause of failure.Just mere talking idle, day dreaming or aimless drifting will not take you to goal , but only divert your attention and dissipate your enemy and strength. Hardships, obstacles, failures are various moments in the way of success. They are not to be ended but to face them bravely, courageously and with double vigor.

8)A child can seldom learn to walk , without making sustained and sincere efforts in the process tumbling and falling down a number of times. His failure never deter him to stop standing again. The determination is the child’s resolve lies in making any number of attempts to stand up and walk wherever be the pair or fear of fall. The failures are the real path-makers / indicators of success. It gives us clues to rectify our mistakes and tell us how to club our efforts in the right direction so that we get success one day positively.

9)Our greatest glory is not in never falling, but in rising every time we fall . Little minds are tamed and subdued by failures, misfortunes but great minds rise above it. We must face every adverse circumstance as its master and do not let it master us. Many men owe the grandeur of their lives to their failures in the beginning.So, in short , failures are pillars of success, stepping stones to success.