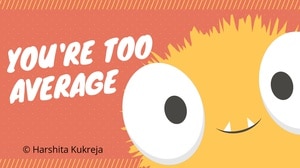 Do you sometimes feel that you might be too average? It is like you were sheltered too much since your childhood and told repeatedly what an amazing kid you were. And now, when you face the real world on your own, you realize that that is just something what all parents say to their children. You are not any more special than the next kid, despite what you were made to believe back then.

This has now probably rocked your whole belief system. You just have one thought in your mind:  You are just too average; you are good for not much.

Well here’s a news flash for all of you thinking that: You are not the only one who feels that way. Almost every other person feels he is too average for this world.

It is an interesting facet of human nature that people seem to have a psychological need to come up with the sort of fictional superheroes that embody perfection and everything else a person wishes to be.

Taking the example of Batman, every person has wished at some point in his life to be like Bruce Wayne – world-renowned billionaire, tech genius, athletic, handsome with a chiseled jaw and muscles as if Zeus himself came down from Olympus and carved him, and when he is not inventing some technology to save the world, he is there helping the weak and the downtrodden.

Characters like this have been created because of people’s need to cope with their own feelings of helplessness at times. Not that you should not try your best in any given situation, but you need to learn to accept mediocrity when you end up there despite your best efforts. This becomes a little difficult when there are not many people arguing the merits of mediocrity, of being blasé boring and average.

Every one of you has your own set of strengths and weaknesses. But the fact remains, you are average at the most stuff you do. Maybe you are an expert in linear algebra, or even playing guitar. But chances are pretty high that you are average at many other things. A single person cannot be an extraordinary performer in all areas of life. And that is okay,

Why? Because mediocrity, as a goal, is not good, but mediocrity, as a result, is acceptable. Not many get this and even lesser accept this. Being average is not a standard of failure. Continue on with your lives doing boring chores, chores that make you average. But maybe you are average for a reason because you are what actually matters.

A junior in B.Tech CSE with a penchant of writing what I strongly feel about, I would like to say that optimistic is the word that describes me. Writing, for me, is a way to deal with the intense emotions and situations in my life.