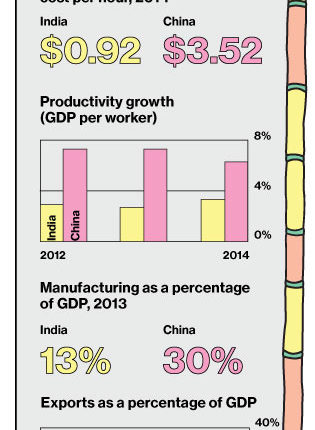 In India most of the things we consume comes with a made in China tag. Whether it is a simple Ganpati idol to things as complicated as Thermal power plant equipment’s like boiler turbines etc. are coming from China.Right from Air conditioners,refrigerators,, microwaves, mobile phone, laptops etc. to even the crackers used in Deepawali celebration is coming from China.
This results in large scale closure o factories in India; and its further result is large scale unemployment and
underdevelopment. The situation has become worse with the relocation o Indian manufacturing industries in China.eg. Suzlon a big wind turbine manufacturer has its design base in India but its manufacturing base has shifted to China, MAhindra- the vehicle manufacturer is planing to shit its base to China

We need to do a SWOT analysis of the situation that why Indian Manufacturers are shifting their manufacturing base to China:

Most commonly stated reasons for this flight of Indian industries are:

1. In India we are paying Rs. 8000 per month to the unskilled workers
whereas in China they are paying 5000 RMB to their per month to the unskilled workers. As per currency exchange rates
1 RMB= 10 INR. Hence Indian labour is 6.25 times cheaper compared to China.
2. It is commonly stated that Chinese workers are hardworking and have 12 hours shift. In India most of the mall scale industries are having 12 hrs shift. On the contrary the Chinese workers have habit of working in a government owned factory so they are more lethargic.

3. China have big Special Economic Zones (SEZ) wherein they have tax exemptions or export oriented industries. In India also we have copied the Chinese model and have same regulations in our SEZs. However most of our SEZs ( alsmost 50 in nos) are lying vacant and unoccupied. eg. The Reliance SEZ in Jhajjar is almost lying vacant.

4. It is said that China has better infrastructure , however the situation is Reverse. Indias Rail Network density per Square Km. area is 3 times that of China. Per square km. road density is of India is 2 times that of  China. Port efficiency ie. days taken for ship turn down time is almost equal for India and China.

5. Economics of scale is same for SUzlon or Mahindra if it is In India or China.

6.Cheap raw material is also not a reason as most of the factories are ordering their raw material like copper, steel etc on London Metal exchange.

7. Indian currency is more devalued ( 10 times) compared to Chinese currency. Indian exporters have an advantage.
So What are the Reasons of our incompititiveness if above 7 reasons are not there.

The main reason is costly Electricity. As per an Industry estimate

In India electricity provided to the Industry is at Rs. 10 per unit.So or Rs. 30 above they buy roughly 3 units of electricity.

So electricity cost is the main reason for flight of Indian Industry to China.There is 22.5 % more margin in manufacturing in CHINA.

India Vs China ManufacturingMake in India