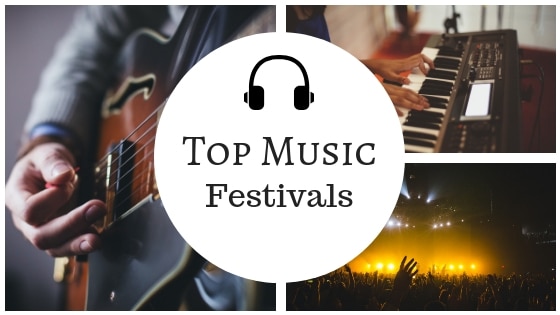 Music festivals in India are something to look forward to every year. 2017 was jam-packed with fantastic festivals where dozens of music performances were conducted all over India.

Last year, India witnessed a variety of music festivals, from city pop-ups to stadium shows and many other thrilling performances. This year too promises to be big on music and is something which one cannot miss out on.

The top music festivals in India this year are as follows:

This music festival was held from 27-28th January in Delhi and was one of the biggest Bollywood bonanzas where every person crooned over to their favourite Bollywood hits. This festival was called as the Gaana Bollywood Music Project festival and took place at the Jawaharlal Nehru Stadium. More than 6 genres of music, 50 artists and 200 musicians enthralled the audience. Some of the artists included Amitabh Bhattacharya, Richa Sharma, Vishal Bhardwaj, etc.

This was one of the highly awaited Gourmet World Music Festival. Currently, it is in its 11th edition and this keeps getting better every year. It is for this reason that its audience always comes back for more. This music festival was held at Sula Vineyards in Nashik and was characterized by great music, good vibes and fun activities. This festival took place on 3rd and 4th of February.

This immersive, multi-genre music festival brought its sixth edition to the citizens of Pune from 9th to 11th February. There were incredible major performances by artists like Sean Paul, Alt-J, Marshmello, Major Lazer, Incubus and Hypnotic Bass Ensemble.

If you fancy some ‘Footloose’ dancing to the blues then Mahindra Blues Festival is just the right one for you and it is also one of the biggest blues music festival gathering in India.

This one is for the enthusiasts and connoisseurs of the musical genre and includes the Godfather of British Blues, i.e. Coco Montoya, John Mayall and Walter Wolfman Washington and also included the Canadian Blues powerhouse i.e. Layla Zoe as well as Mumbai’s Blackstratblues. It took place on 10th and 11th February at the Mehboob Studio, Mumbai.

This was an annual music festival which was held at Ziro Valley in Arunachal Pradesh in September. It witnessed enthusiastic participation from music lovers as well as travellers.

Musiconcepts initiated the MTV India Music Summit and upped their ante this year as they included more music, more conversations and other activities. The summit conducted this year included amazing stalwarts like Ustad Shujaat Khan, Shankar Mahadevan, L Subramaniam and many popular artists from all over India.

The main motive of the summit was to restore the faded genres of music and also to heartily celebrate the music of the moment. With over 36 hours and 100 artists, this festival brought musicians from all genres and listening to it were listeners from all ages. People who attended the summit immersed themselves to the sound of music and came back asking for more.

The road to Ultra India

Electronic Dance Music has been attracting many followers in India in the last few years. Conducted on September 8, 2018, in New Delhi, Ultra conducted the EDC and Sensation.

This music festival included many popular musicians and artists. Everyone let their hair down to the music beats.

This was a folk fusion festival which bought together many renowned artists like Anwar Khan, Amit Trivedi, Pandit Vishwa, Mohan Bhatt, the Manganiyar Classroom and others.

Conducted on the 6th and 7th October at Mumbai, this festival included Rajasthani and Goan folk performances like Portuguese tunes and classic Konkani by keyboardists Merlin D’Souza and Viva La Goa. There was also Indian classical from Rahul Sharma, Desert folk and fusion from ace composer Shantanu Moitra.

This music festival was conducted on October 27th and 28th in Karnataka. It roped in UK’s electronic veterans, city-based rockers like Parvaaz and also Beijing-based Mongolian throat singing artist Tulegur.

The music genres also included the esoteric electronic music from the Aerate Sound and Disco Puppet. There were also other music artists like Ms. Mohammed who is a UK based rock queer artist who has welcomed music artists from the LGBT community.

Over the years, music festivals have upped their ante and provided Indians a lot of exposure to a wide variety of music genres as well as famous artists, not only nationally but internationally as well. With more and more music genres adding up, people have a lot to look forward to this year.

Jaswant is a professional blogger who writes for a variety of online publications. He loves writing blogs and helping people.