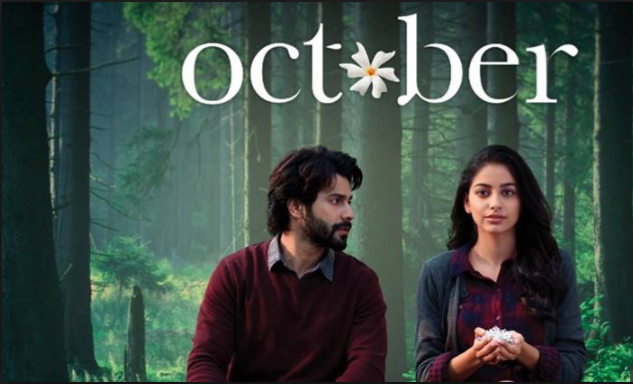 October Story: Dan (Varun Dhawan), a student of hotel management is doing an internship at one of top hotel in Delhi along with his batch mates. An incident occurs at the hotel where one of his colleague Shiuli (Banita Sandhu), faced major accident and lands up at the hospital. This affected Dan very deeply from inside, and he started spending his all time at the hospital even it affected his Job and he was suspended from Hotel.This is a emotional journey where a boy started loving girl without any expectation.

Shoojit Sircar’s movie ‘October’ says a lot, Yes, it is a film about love, seen from Dan’s pure heart and simple world-view and Shuili’s silent. It’s not a story created with heavy doses of dialogues, romantic songs s or histrionic episodes common to the genus. The beauty lies in the simplicity of it all. Dan is a 21-year-old who still has a lot of growing up to do; he’s bulky and careless at work, arrogant too. He doesn’t speak much but a straightforward guy . Dan expresses himself with a little innocence that makes him lovable. As colleagues, Shiuli and he share nothing more than a few appearances  and some casual conversation. After her accident, as she lies in bed, Dan is drawn to her agonizing and motionless world. And something flows and flourishes between them. Something called love, maybe?
At times, watching movie you forget that you are watching a movie; instead, you become a spectator to the lives of real people, with real, uncorrupted emotions. The scene at the hospital between Dan and Shiuli, where they acknowledge their relationship in their own indescribable way, is skillfully written .Its a movie with full of emotions and makes you break into a smile.

Varun Dhawan has given one of the finest performance of his career till now. Shoojit brilliantly moulds Varun into Dan, making you forget that you ever saw him chilling  shirtless on screen before. Debutante Banita uses her beautiful eyes to express emotions. It’s an backbreaking task, as that’s the only ammo she has at hand. Gitanjali as Shiuli’s mother is a class act.October is not a Love Story, but rather a story about love.

In love and relationships, a lot remains unsaid and undefined. What can’t find it’s way into words, will find a way to flow out. Let it. The fragrant memory of Shiuli (the Bengali name for Night Jasmine) and Dan’s unconditional story will linger long after.