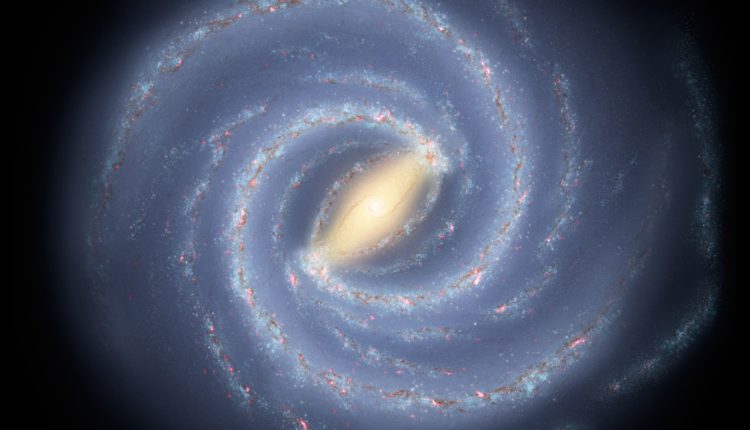 How to half milky way may be stolen materials

Some galaxies may grow by swiping gas from their neighbors. Those thieving ways may be at work in even our galaxy, the Milky Way. New computer analyses suggest that nearly half the mass in the Milky Way might have started as gas released by other galaxies. That gas is a raw material from which galaxies build their bulk.

The finding is scheduled to appear in the Monthly Notices of the Royal Astronomical Society. The new analysis reveals an, unexpected way that galaxies may acquire mass. It also offers clue to how they evolve.

“These simulations show a huge amount of interaction among galaxies — a huge dance that’s going on,” says Romeel Davé. He is an astronomer in Scotland at the University of Edinburgh. That dance, and the subsequent exchange of atoms, could be what establishes a galaxy’s character. It could determine whether a galaxy is small or big, elliptical or spiral, quiet or
bursting with star formation. Results from the new computer model need to be confirmed with observations. But this could be a major step toward understanding galaxy formation, says Davé.

It makes sense that much of the material in one galaxy actually came from others, says Claude-André Faucher-Giguère. “Still, the result was really unexpected,” says this coauthor. A theoretical astrophysicist, he works at Northwestern University in Evanston, Ill.

Astronomers had thought galaxies got their matter in two main ways.

In the first, atoms would clump together to form stars. These would then assemble, through gravity, to form galaxies. Much of this likely would have taken place not long after the Big Bang, some 13.8 billion years ago.

In the second way, some of those atoms would have eventually been ejected by exploding stars, known as supernovas. Those atoms likely would have rained back down into this same galaxy. That would have recycled the gas over and over.

The new simulations show a third way galaxies could obtain gas. Powerful supernovas would eject atoms in the form of gas. These could travel far off into intergalactic space. Pushed by galactic winds, they would eventually arrive at new, distant galaxies. Those cosmic winds travel
at several hundred kilometers (miles) per second. When the particles they carried neared some galaxy, its gravitational pull would suck them in.
These particles would then serve as the basis of stars, planets, dust and other material in this new host galaxy.

Such an exchange of atoms is extremely difficult to spot in space. After all, these gas atoms would not give off light, as stars do.

Explainer: What is a computer model?
Faucher-Giguère and his colleagues spotted the gas exchange in a computer model. That model predicted how galaxies would have formed just after the Big Bang. It also suggested how they likely have evolved over time. The team tracked gas atoms as they moved through this sim universe, as they formed stars, and as exploding stars later ejected those atoms again from
their home galaxies.

In the model, up to half of the atoms in large galaxies came from other galaxies. More massive galaxies have more gravity. So they tended to pull atoms from the ejected material of small galaxies. This accumulation of foreign matter appears to take billions of years. It takes that long for
atoms to travel the vast space between galaxies, the team notes.

“It’s that not surprising to see a galaxy kick out matter, which is then pulled in by other galaxies,” Davé says. What is surprising, he says, is how much matter can be transferred this way. Before seeing the simulations, he would have guessed that maybe a max of 5 percent of gas was transferred between galaxies, this way. “To see that it is up to 50 percent is pretty
remarkable,” he says.