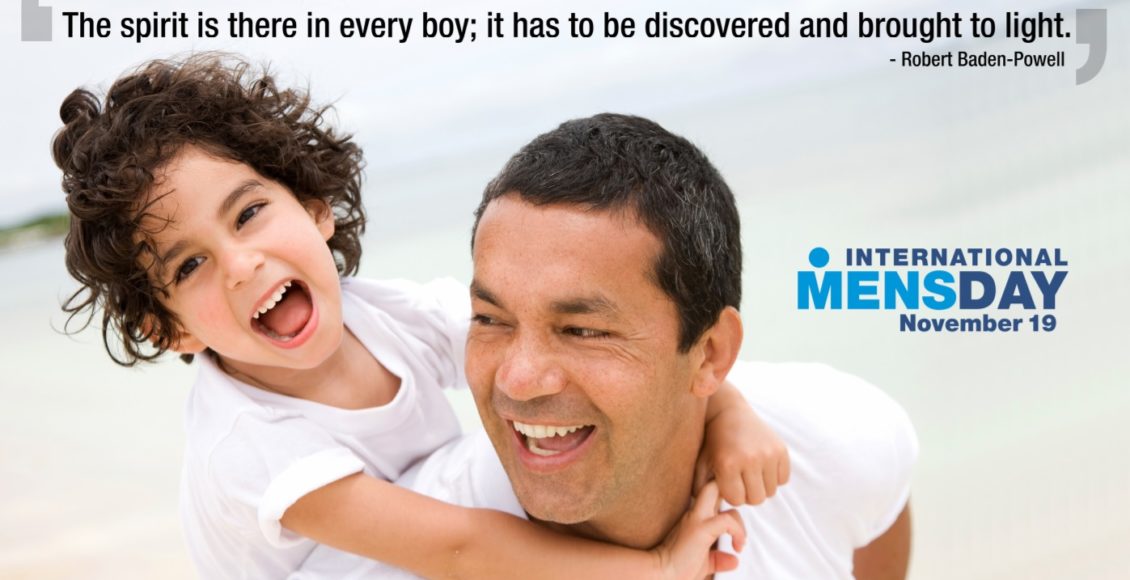 We welcome you to the International Men’s Day.

Objectives of International Men’s Day include a focus on men’s and boy’s health, improving gender relations, promoting gender equality, and highlighting positive male role models. It is an occasion for men to celebrate their achievements and contributions, in particular, their contributions to community, family, marriage, and child care while highlighting the discrimination against them.

The theme for 2017 is Celebrate Men and Boys. We know that Men’s health is worse than women’s in almost every part of the world. Recent World Health Organization (WHO) data shows that, globally, male life expectancy at birth in 2015 was 69 years; for females, it was 74 years. Women on a worldwide basis live 5 years longer than men. We know that over 95% of work place fatalities are men and that 99% of combat deaths are men.

We also know that in almost all the countries of the world the suicide rate is worse for men than women and averaged out, the rate of suicide for men is up to three times that of women. In Russia, it is 6 men for every 1 women. Most people know that men suffer unfair discrimination in family law in most countries of the world and in western nations men and boys are dropping behind in school and university.

Having said all this we are asking you to Celebrate Men and Boys on the 19 November 2017. This year for International Mens Day we want to accentuate the positive but in the run up to this day of celebration we encourage you to organize a screening of the Red Pill to draw attention to the many issues that negatively impact on men and Boys.

Cassie Jaye the award winning director of the Red Pill movie is a brave young woman who has taken on the establishment single handily and told the truth about the discrimination men face. Go to Cassie Jayes website to find the best way to get a copy of this groundbreaking documentary  www.redpill.com

The November IMD is a significant date as it interfaces the popular ‘November’ charity event and also with Universal Children’s Day on Nov 20 with which IMD forms a 48 hour celebration of men and children respectively, and of the special relationships they share.

The ability to sacrifice your needs on behalf of others is fundamental to manhood, as is honour. Manhood rites of passage the world over recognise the importance of sacrifice in the development of Manhood.

Men make sacrifices everyday in their place of work, in their role as husbands and fathers, for their families, for their friends, for their communities and for their nation. International Men’s Day is an opportunity for people everywhere of goodwill to appreciate and celebrate the men in their lives and the contribution they make to society for the greater good of all.

Methods of commemorating International Men’s Day have included public seminars, conferences, festivals and fundraisers, classroom activities at schools, radio and television programs, Church observances, and peaceful displays and marches. The manner of observing this annual day is optional; any organizations are welcome to host their own events and any appropriate forums can be used.

International Men’s Day is celebrated in over 60 countries of the world. Too many to list. Join us on November 19 in celebrating the contribution men and boys make to those around them, to their family and friends, their work place and the community, the nations and the world.